1/6/2023
By Peter Edmiston
If you want to see Coach Thomas Jones light up, ask him about Maxine Engel ’21 and her journey from a rising ninth grader with a broken leg to a senior walking away as a State Champion. “You know how most coaches say, ‘I helped a kid?’ Well, she helped me. Helped me grow as a coach.
“When Maxine was a freshman, I told Caroline Schaefer [now athletics director] and Kristen Ring, head of school, ‘Remember that name: Maxine Engel.’ It wasn’t that I thought she was the best basketball player. She’s a great player, don’t get me wrong, but I wish I could create something like the Hall of Fame of Character. That whole group had amazing character, and she was the leader,” said Jones.
High praise, indeed, but fitting for a leader both on and off the court, who helped her team navigate COVID and end her senior season with an epic Cinderella story. Now majoring in public health with an interest in policy and law at George Washington University, Engel continues to display the same level of confidence and tenacity. She is studying different aspects of our healthcare system, and has visited Capitol Hill to meet with leaders about Title IX issues. Her development into a champion wasn’t inevitable, though. It required effort, perseverance, and more than a little help from those around her. 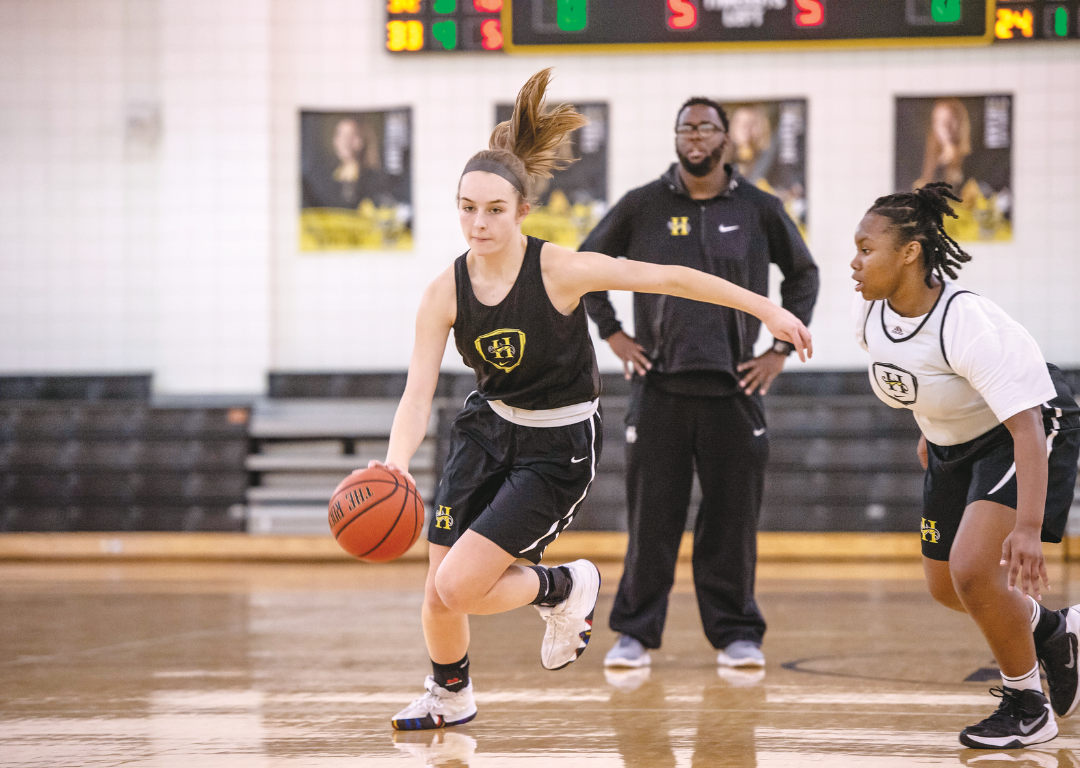 Maxine Engel ’21 practicing with Sting teammate Kiya Brown ’21 and Coach Thomas Jones | Photo by Brandon Dill
Engel’s basketball career started early, in elementary school. After graduating from Grace St. Luke’s, when the time came to find a high school, Engel admits she and her parents had reservations about Hutchison. Maxine’s father, Randy, said as soon as they got to campus, they began to realize how wrong they were. “We went through the process, toured the facility, and met with some folks,” he said. “As we walked out, Maxine’s mother looked at me with a smile and said, ‘I’m blown away.’ ” Maxine herself said, “Everyone was so friendly and genuine. I knew Hutchison was the place I wanted to be.”
Engel arrived on campus injured, after an accident in the summer left her with a broken tibia and fibula in her left leg. On top of that, several key seniors had departed the program, meaning that Engel and her young teammates had a lot to deal with in a short period of time. In the first game of the season, Hutchison lost to Nashville’s Father Ryan 33-11.
“Coach Jones had extreme confidence in me and the players who were around me ... I think that helped me grow confidence in myself.” — Maxine Engel
There was only one direction to go from there.
“I think Coach Jones had extreme confidence in me and the players who were around me,” Engel said. “He showed love for all of us, and I think that helped me grow confidence in myself.” But growth isn’t necessarily linear. In their sophomore year, Engel and the Sting took a few steps forward, making it all the way to the state semifinals. That game ended in a 27-point loss to Ensworth. In the following season, they made it to state again— and faced Ensworth again—but this time it was far worse, with the Sting losing by 62 points.
Suffering a defeat like that would have made it easy to give up. Engel did the opposite. She and fellow senior Carmyn Harrison ’21 called Jones the day after the Ensworth loss and told him they were willing to do what it took to succeed.
Then, like the rest of the world, the Sting team faced an unexpected opponent—COVID-19. Suddenly nothing was normal, but that didn’t stop Engel and her teammates from wanting to put together a historic senior season. Like so many others, they had to isolate, but Engel organized Zoom sessions with the senior players and Jones to make sure everyone was still on the same page. “Maxine formed the Zoom calls,” Jones said, amazed. “I didn’t even know how to Zoom yet!”
To reduce the risk of COVID-19 exposure, the team agreed to limit themselves from going out. Any social function would have to be done as a group and only outside. “I said, ‘Let’s make a deal. You don’t go out. I don’t go out. If we go out, we go out together,’ ” Jones recalled. “They would have bonfires. They were smarter than most. They still wanted to hang out and figured out a way to do it together.”
Sacrificing social outings as a senior was incredibly difficult, but Engel did it in service of a bigger goal. That sacrifice went along with extra workouts in the mornings and brutal practices throughout the year. Maxine’s mother, Shawna, said she’d never seen anything like it: “That senior year, they were meeting at the gym at five in the morning. In my mind, I was thinking ‘Okay, do you need to do that?’ but they set a goal.”
That goal was a state championship. Hutchison made it to the state tournament again, and once again faced Ensworth, the two-time defending state champions that had beaten them badly in their previous two postseason meetings. “If you look at our history, Ensworth has always been the team that knocks us out of the tournament. We knew they were going to be a strong team, but we were prepared,” Jones said. The game ended up going into overtime tied at 48, but after the five extra minutes, Hutchison came out victorious.

“You don’t really think about what’s on the line when you’re in the game, you just play,” Engel said. “But after we won, I think that’s when we knew we had won the state title. Beating Ensworth was the championship in itself, just because that game had so much history tied to it.”
The next afternoon, Hutchison claimed its first-ever basketball state title with a win over Knoxville Catholic. Engel remembers the day well. “Going into the Knoxville Catholic game, we were supremely confident and ready to win. It happened so swiftly, so quickly, it was a very surreal moment when the buzzer went off. We finished the game and looked at our phones. We got emails and texts; we saw Instagram videos of all the little girls at Hutchison watching our game and doing cheers. It was incredible.”
Shawna Engel said it was a moment she’d never forget. “They set a goal, and then they just went out and did it. I still get chills thinking about how her senior year ended up.”

“She’s bigger than a basketball player. She’ll be a leader in this country one day, I guarantee it.” — Coach Thomas Jones
“I like to always think anything is possible,” Maxine Engel reflected. “But I definitely was not expecting to come to Hutchison and win a state championship. I never imagined it would be that Cinderella story, especially since we had been dealing with COVID and the season was so hard for everyone. It couldn’t have ended any better.” That championship, that COVID-affected season, took everything Engel had. “It was a hard year mentally, and I was done with the sport, or so I thought. I wanted a normal college experience. I wanted to be done with basketball,” she explained.
Engel’s uncertainty hit Jones hard. “I did a lot of praying. When there’s a kid you know can do something, and she says she doesn’t want to do it, you question everything. You question yourself. She looked me in the eye one day and said, ‘I don’t know if I want to keep playing, Coach.’ ”
After many conversations with her father, her mother, Jones, and coaches at her university, George Washington, Engel elected to walk on to the Colonials basketball team as a freshman. “I had this thought that I would regret it for the rest of my life if I didn’t at least try,” Engel said. “I remember feeling this sense of relief after I made the decision. It was freeing to let myself come back to basketball on my own terms.” 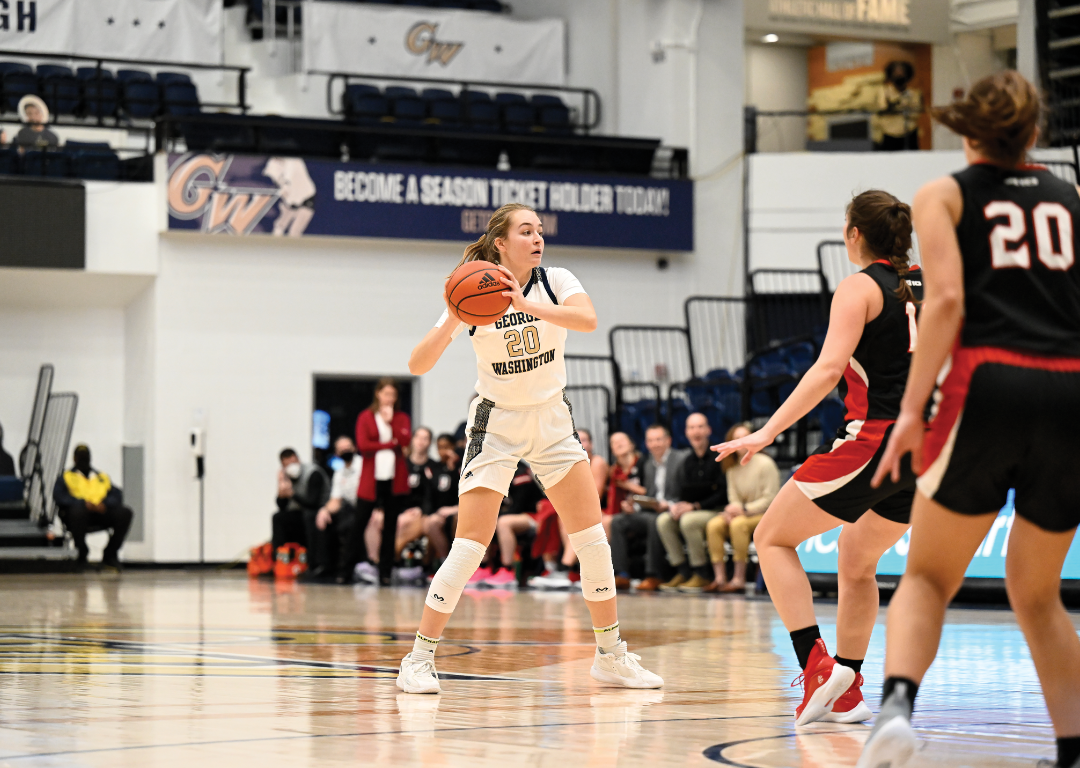 Maxine Engel ’21 elected to walk on to the George Washington University Colonials basketball team as a freshman | Photo courtesy of GW Photos
Engel walked on at George Washington without any expectation of playing even a single minute. Within weeks of her freshman year, she was playing regularly. Jones had a feeling she would be. Engel was placed on scholarship this past summer and is now a key member of a talented Colonials team. Off the court, she has spent time on Capitol Hill and is learning about Medicare, Medicaid, and other components of the nation’s healthcare system. Engel credits her Hutchison experience with preparing her in all facets of her life.
“You’re able to truly be yourself at Hutchison in all that you’re doing, and I think that has translated into how I am at George Washington,” Engel said. “I have an ability to unwaveringly be myself and not worry if that’s what anyone else wants to see. That’s what I’ve grown up with. That’s how I’m most comfortable. Hutchison helped me build that foundation and the belief in myself, that I can put the best version of myself out into the world.
“From the teachers to the other students, everyone at Hutchison has supreme confidence in what you want to do, and they’re willing to talk to you about what’s going on in your life and how you’re doing. They’re always able to pick you up when you’re down or point out how hard you’ve been working. It goes a long way.”
None of Engel’s successes have come as a surprise to Jones. “She’s bigger than a basketball player. She’ll be a leader in this country one day, I guarantee it.”
Back