Allison Blankenship ’12: A View from the Hill

1/12/2023
Allison Blankenship ’12 has committed her 10 years since graduating from Hutchison to working in the political arena, spending the last five years working in the U.S. House of Representatives.
“Even before Hutchison, I was interested in politics,” recalled Allison Blankenship ’12. “Cable news was always on in our house. My parents and my godparents were well-informed voters. When I came to Hutchison, the idea of learning about and giving back to your community became intertwined with an interest in politics for me.”

It was a field trip that kindled the spark. Blankenship was part of Rogers Scholars, a program that affords Hutchison students the opportunity to study issues that affect the City of Memphis and meet with leaders at local nonprofits. Blankenship remembered visiting Church Health, a faith-based healthcare nonprofit. “I was learning about public health and the access to public health or the lack thereof,” she said. “I realized that being in the public health sphere is also a form of public service. Rogers Scholars opened my eyes to the fact that there are many different ways to do public service and to give back to your community.”

Blankenship then had an opportunity to take a deeper dive. When a representative of the St. Albans School of Public Service visited Hutchison, she learned about the school’s four-week, coeducational program for rising seniors interested in government, public policy, and public service. She couldn’t get to Washington, D.C., fast enough. “I met other kids who were just as excited about this topic as I was, and I had the opportunity to learn from them how they were involved in their own communities.”

During the four weeks, Blankenship and her summer classmates studied the differences in city, state, and federal governing and explored the variety of public service possibilities. They also heard from guest speakers such as Dr. Anthony Fauci (long before he was a household name), took tours of the Capitol, and met Supreme Court Justice Elena Kagan. “It was definitely the best four weeks of my life,” she recalled.
Blankenship set her sights on a university in the D.C. area. She had applied to George Washington University and Georgetown, and was pretty set on attending GW. When she visited the Georgetown campus again, however, there was a vibe that struck her as right. “I felt this community, this sense that even in this crazy, chaotic city I could still find a community and find a place of belonging.” That sealed the deal and she ended up going to Georgetown and studying economics.

Navigating the House of Representatives
Even though it’s only been 10 years since Blankenship graduated from Hutchison, she has spent five of those years working on Capitol Hill in the U.S. House of Representatives. She started as a Staff Assistant and Legislative Correspondent, worked as a Legislative Aide and then Legislative Assistant, and is currently a Floor Assistant for the office of the Speaker of the House, Nancy Pelosi. With the results of the 2022 midterm elections, the Speakership will change. “My favorite thing that I bring to the room is my identity, who I am, my personality, the lens through which I see the world.”
She readily admits there is no typical day when working on the Hill, but she and her team keep the House Floor running. This means supporting the day-to-day legislative functions, including determining when bills might come to the Floor, when they’ll convene, when a vote will happen, and when they’ll have a debate and for how long, among other things.
In her previous job as a Legislative Assistant, she often met with constituents and other stakeholders to hear about issues affecting their district or state. She would work with them to take ideas, turn those into amendments or a bill, and then bring that bill in front of committee and watch it get voted on. These days, as a Floor Assistant for the Speaker, her job is to take bills that have made it out of committee and work with the committee and the member’s staff to get the bill ready to bring to the House Floor for a vote. In a full-circle moment, she recently witnessed a bill she worked on in a previous job being voted on.
Much of what Blankenship does she’s learned on the fly. Learning the workings of Congress is complicated and takes time, and there isn’t much of a playbook. “Coming into Congress, there was no manual for how to do my job. I use a lot of the tools I gained at Hutchison about finding my own voice, standing up for what I believe in, standing up for myself, and not being afraid to ask a question,” Blankenship said. “Even though I might be the only woman in the room a lot of the time, and many times the only person of color, I’ve learned to be confident in what I have to say. Hutchison helped instill in me that confidence to speak up and be my own person.”
She also has learned how to think differently about sometimes being the only person of color in a room. “I’ve always been okay with raising my hand and saying ‘the answer is five,’ Blankenship said as an example. “But giving nuanced answers and giving answers that reflect and put a spotlight on my identity has been harder for me to come to terms with. Now it’s something that I love about myself. My favorite thing that I bring to the room is my identity, who I am, my personality, the lens through which I see the world. I’m no longer afraid to speak up and give those nuanced points of view anymore, because the world needs that now more than ever.”
Still, Blankenship admits being completely comfortable in her identity is not something she’s perfected. While she’s more at ease with it now than 10 years ago, it is still a muscle she has to exercise. She has worked hard to find other women, and other Black women, on the Hill from whom to elicit support. She also looks to her mother, who works as a corporate attorney for a bank.
“My first role model has always been my mom. She’s another Black woman making her way through corporate America. I’ve watched her navigate that, and I’ve seen the obstacles that she’s overcome, all while raising a family. That’s been incredible and inspiring to me. My mom is my rock.”
What Inspires Her

A guiding force that Blankenship brings to the table is a desire to help other people. “I always remind myself, ‘I’m here because I want to make a difference,’ ” she explained. “I’m here because at the end of the day, the work that we do in Congress matters, and the work that we do here makes a difference. It’s always about the people who we serve. I keep that in mind no matter what. It sounds cliché and like something a politician would say, but it’s true for me when I think about how much policy can shape and help people’s lives.” 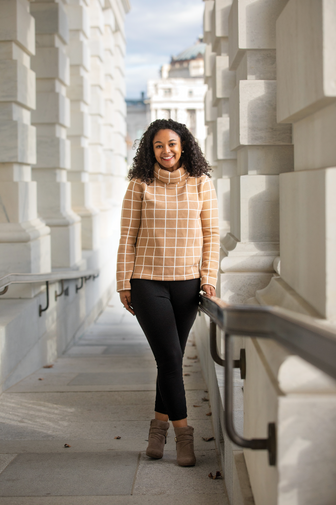 Before starting to work in the House, Blankenship was a field organizer for the Pennsylvania Democratic Party in 2016. She recalls enjoying the conversations she had with volunteers who were not getting paid to help make phone calls or knock on doors. She asked them what brought them back every week, and they would tell her their experiences with healthcare, education, and other issues.
It was an indelible experience. “I take those stories with me to work every day. When I’m sitting at the table, it’s like they’re sitting at the table too, because those stories stay with me. Those stories are the reason I continue working in politics. It’s easy to get lost in the bubble of D.C., but remembering those stories and trying to stay connected is important.
“What I love about working on Capitol Hill is that I’m surrounded by so many other smart, ambitious people who also are there because they want to give back because they want to make a difference,” Blankenship said. “You see people from the college-aged interns all the way to people who have been on the Hill for years. We’re all there for the same reason.”
Blankenship acknowledges that her vocation is an extension of her own personal beliefs. She is grateful to Hutchison for helping her develop the confidence to find her own voice and explore her interests. She knows the heart of rewarding work is the intersection of passion and impact.
In addition to Pelosi, Blankenship has worked with Congresswoman Pramila Jayapal of Washington State and Congresswoman Lucy McBath of Georgia. “I’ve been lucky to work for incredible female members of Congress who have blazed their own trails and are inspiring for the work that they’ve done in the past and continue to do.”
“I use a lot of the tools I gained at Hutchison about finding my own voice, standing up for what I believe in, standing up for myself, and not being afraid to ask a question.”
A Powerful Moment and Giving Back

It’s not lost on Blankenship that she gets to witness history, almost daily. In her first month on the job in the Speaker’s office, she was on the Floor when the House was debating the bill about whether to declare a Federal holiday for Juneteenth, the day that commemorates the emancipation of enslaved African Americans.
She recalled listening as Majority Whip James Clyburn of South Carolina spoke about the history of slavery in America, and then hearing Congresswoman Sheila Jackson Lee, who’s been in Congress since 1995 and is considered a trailblazer. Blankenship was also thinking about her parents who were both born before the Voting Rights Act of 1965, which outlawed discriminatory voting practices adopted in many southern states after the Civil War.
“Being able to sit there in the House of Representatives … to be working for the first female Speaker of the House, and to be there as a staffer … there were just so many different emotions,” Blankenship recalled. “People of color say ‘my ancestor’s wildest dreams,’ and in that moment I truly knew what that meant. I still get chills even now just thinking about it.”
It’s important for Blankenship to give back to those places that have meant so much to her. She serves as the regional planning chair for Hutchison’s Alumnae Association Board, as an interviewer for Georgetown’s alumni admissions program, and as a board member for St. Albans School of Public Service.
“When I think about Hutchison and I think about St. Albans, they’re two institutions that were the foundation for so much of who I am,” Blankenship said. “Rogers Scholars opened my eyes to giving back to the community and the idea of service and what that means and looks like. St. Alban’s opened my eyes to policy, and how you can turn that into something at the federal level. I wanted to give back to two institutions that gave me a lot in my formative years.”
As for advice for Hutchison girls, Blankenship said, “It’s okay to not have it all figured out at any point in your life. When I graduated from high school, I felt like I had to immediately know what I was going to major in and what I was going to do after college. Then senior year of college, I felt like I immediately had to have a job lined up after college and know what I was going to be doing for the next 40 years of my life.
“It’s okay to not have a five-year plan, because even my best five-year plans could not have predicted how my life would turn out up to now. Follow what you’re passionate about, because it will never lead you astray.”
Back