11/4/2021
Zoe Zerwig Ford is embracing a new opportunity to share her enthusiasm for artificial intelligence and grow as a leader after completing several intensive programs with Inspirit AI, a program run by Stanford and MIT alumni and graduate students.
Her interest in computers and technology started with something simple: watching her brother play video games. She wondered how they worked, and her fascination grew from there.

Zoe's interest has evolved into a passion. She has taken a computer science course and completed several artificial intelligence programs with Inspirit AI. Now, she is stepping into a new opportunity: AI Leadership Fellow.

The program pushes students to become an artificial intelligence leader in their communities and inspire their peers to learn more about AI programs. It also connects them with AI professionals and mentors from institutions including Microsoft and Google. Zoe has the opportunity to attend weekly webinars and sessions with global leaders from across the AI field, which she has enjoyed.

“It’s nerdy but interesting because you get to hear how they got to that point in their life and how they view AI, the world of technology, and how they think it'll evolve and change,” Zoe said.

So what is artificial intelligence? At its most basic, AI is the simulation of human intelligence processes by machines, especially computer systems. For instance, asking Siri or Alexa a question and then receiving an answer is probably one of the more well-known examples of AI technology in use. AI programming focuses on three cognitive skills: learning, reasoning, and self-correction.

Zoe’s own journey is just beginning. This summer, she completed the AI Scholars program, a high school intensive in artificial intelligence with Inspirit AI. Before she started, she knew Java, a programming language, but she did not know how to code in Python. The program managers taught her step-by-step during the first week, and by the second week, she was put into a project group, where she learned about artificial intelligence in healthcare, space, and sustainable farming. 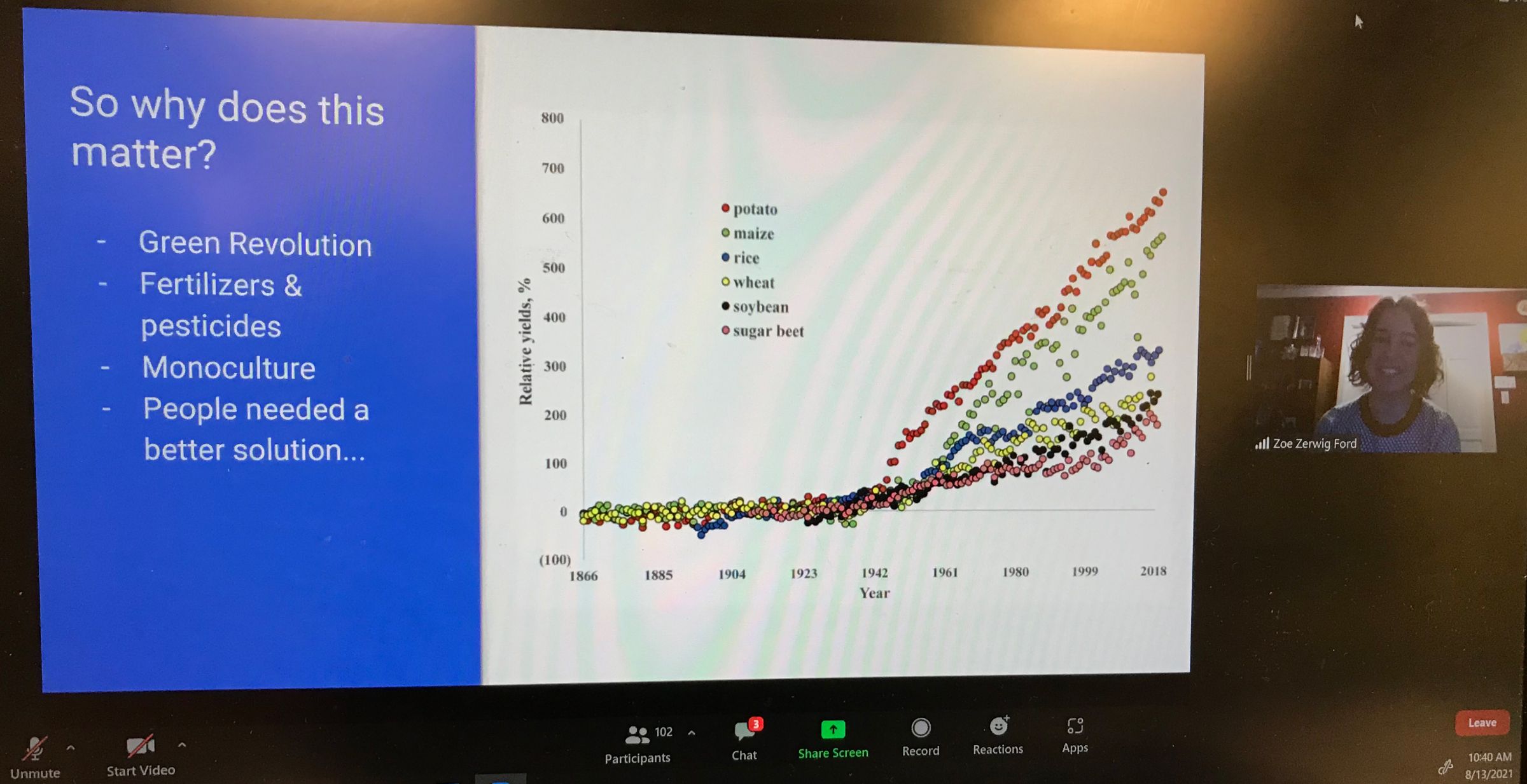 Zoe Zerwig Ford '23 presented her project on sustainable farming to Inspirit AI program managers in August.
Then, her group got started on their project about sustainable farming. Zoe received data on crop yields and more than 600 bacteria present in soil from over 1,000 farms in Australia. Her group’s goal was to determine which farms had better crop yields. She used artificial intelligence to filter out irrelevant data, put the relevant information into different graphs, and looked at different ways to explore and categorize the data before presenting it to program managers.

After a positive experience this summer, Zoe enrolled in another program this semester that focuses on artificial intelligence in healthcare. She is building an AI model that detects emotions by looking at a person’s eyes, nose, jawline, lips, and other facial features. Zoe said she believes these programs are giving her a head start and will ultimately provide an advantage in pursuing a career in the artificial intelligence field.

"I’ll know how the tools that I would use in my everyday life work and how they apply to the real world around me,” Zoe said. Zoe is building a computer vision model that looks at pictures and finds points on the face, outlined in green above, to accurately detect emotions as part of her program on AI in healthcare.
Her interests go far beyond artificial intelligence. The arts play a big role in her life, and her parents have been a big influence. Her mother, Tracey Zerwig Ford, is the arts and community engagement director at Hutchison.

Zoe is a self-proclaimed “music nerd” who has learned to play the violin, piano, and electric and upright bass. She plays in Hutchison’s orchestra club and is participating in the Memphis Jazz Workshop. Zoe acts in Hutchison theatre productions and is in the cast of the upcoming run of As You Like It. She also sings in the choir and founded the She Leads Club, a new leadership initiative through Girls Scouts USA, and SWEnext (Society of Women Engineers) organizations at Hutchison. She said she would not rank one interest higher than the others, but technology and artificial intelligence play a large role in her career aspirations.

“Artificial intelligence is ever-changing, ever-present, and it'll only get bigger. While it's still in its developing stages, still blooming, I want to be part of that and know how it works,” Zoe said.

Now in her new role as an AI Leadership Fellow as an ambassador for Inspirit AI, Zoe is encouraging her fellow students to give artificial intelligence a try. She said it might appear “daunting” or “terrifying” at first, but artificial intelligence professionals are ready to help pave the way. She is currently writing an article for Signpost, the Hutchison student magazine, on what she is learning about AI and its applications.

“The field itself will keep progressing, and AI will change the world,” Zoe said.
Back