Naja Shabazz ’01: From Inspired to Hired

10/1/2021
Naja Shabazz ’01 recalled one of the first inspirations for her interest in interior design. “When I was growing up, we had encyclopedias at our house. You know, actual books on paper. Ours were from the 1960s, and so a bit behind, even for then. They were fascinating to look at.”
She remembered how the books were akin to little time capsules. One of the editions, she explained, enthusiastically described Richard Nixon’s presidency. She read many of the volumes, and once landed on an entry about interior design. When she read that section, it planted a seed that stayed with her.
Later, when she enrolled at Carleton College in Northfield, Minnesota, she decided to major in English. At the time, interior design didn’t seem like a possibility. “It was one of those things where life just keeps rolling and you don’t think about it,” she remembered. Nevertheless, she continued to notice signs pointing her toward her dream. “I would come home for spring break, and my mom and my sister were watching shows on HGTV,” she remembered, laughing. “I was like, ‘Oh my gosh, I want to do this!’ ”
Changing majors midstream wasn’t an option. For one, Carleton didn’t have an interior design program, and Shabazz was enjoying her experience at the school and didn’t want to start over at another university. She formulated a practical solution for the situation. “I said to myself, ‘Why don’t I finish this degree, get some work experience, pay down some debt, and when I’ve done that, then I’ll go pursue this next dream.’ ”
Unlike others who have made similar promises, Shabazz stuck to her plan. After graduating from Carleton in 2005, she moved back to Memphis and worked first at a gym and then as a program associate at Latino Memphis, where she was able to use the Spanish-speaking skills she had polished at Hutchison. Then Carleton came calling again. This time, the college had a job offer in the alumni relations office, so she moved back to the often frigid weather of Minnesota and served as Carleton’s assistant director of alumni relations for almost five years. She enjoyed seeing the other side of life on campus and was involved in the school’s 10-year strategic planning process.
She discovered that one of the perks of working at a college was that staff could take classes. She had already excelled in Spanish, so she challenged herself by taking a class in Arabic. She admits her Spanish is much stronger and jokes that sometimes she speaks what she calls ‘Sparabic.’ “If I’m speaking Arabic and there’s a word I don’t know, my brain will be like, ‘Oh well, here’s this Spanish word,’ and I’m like, ‘No, no, no!’ "
In 2014, Shabazz finally decided she was in a good place financially and took the plunge. She applied to a number of different universities with interior design programs across a wide geographic area, from Virginia to Tennessee to Kansas and Arizona. She chose O’More College of Design in Nashville, where she completed a four-year, bachelor of fine arts in interior design program. The school has since become a part of Belmont University.
The Army Comes Recruiting
Many people might not be aware of this, and neither was Shabazz at the time, but the U.S. Army Corps of Engineers employs a number of interior designers. She discovered this at a career day at O’More. “I looked at the list of who was coming, and I saw there were the requisite residential designers, but then I saw the Army. I said, ‘What does the Army want? I gotta check this out.’ ”
She remembered telling her brother, who is in the Navy, about this particular discovery, and he was equally stumped. He showed her a video of Navy bunks and said, “This isn’t really design.” She said she understood how he could think that, but then a lightbulb went off in her head: someone has to lay out where those bunks are going, to requisition them, to make sure they are up to standards, and to deal with the logistics of getting them delivered to facilities and installed correctly. 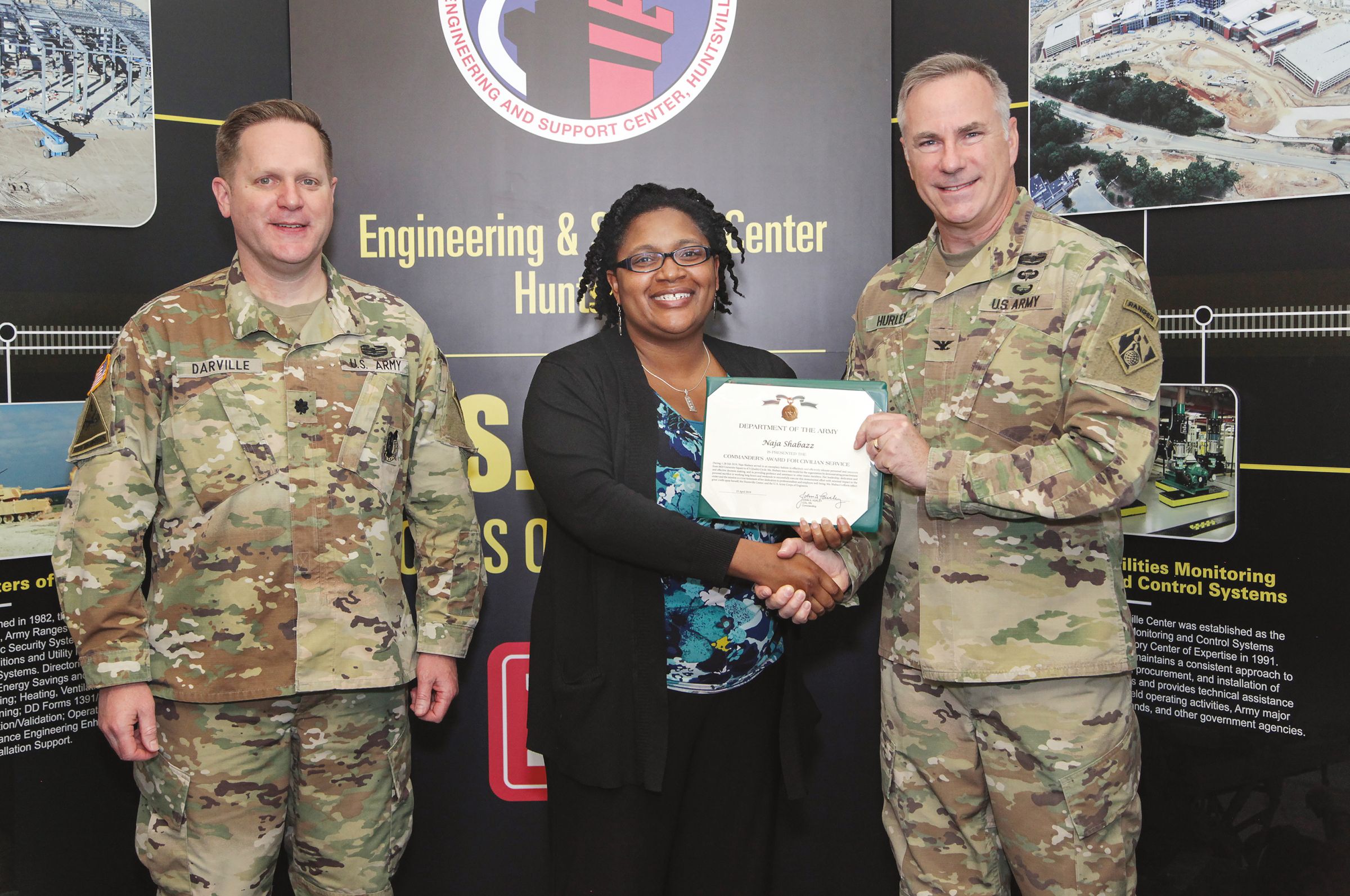 Naja Shabazz ’01, center, receives a Commander’s Award for Civilian Service for her interior design work from the Department of the Army.
The career fair paid off, because soon after graduating, Shabazz was hired as an interior design intern at the U.S. Army Engineering and Support Center in Huntsville, Alabama, which eventually turned into a staff position. The Support Center provides three different interior design functions: a housing team, which designs barracks and other housing needs; a medical team, which outfits medical facilities, and an administrative team—the team Shabazz is on—which focuses on administrative complexes, schools, hangars, fire stations, and a variety of other spaces.
As an example, if Fort Belvoir in Fairfax County, Virginia, needs furniture, they contact Shabazz’s group, which reviews the plans and specifications to understand the needs. Shabazz and her colleagues follow certain standards. Furniture specifications might change, for instance, depending on a person or group’s rank in the Army. They also are required to seek multiple bids for the materials and handle the logistics of procuring the furniture and making sure it arrives on time.
Before COVID-19, Shabazz spent much of her time traveling to different locations to survey needs and ultimately make sure installations went according to plan. For the past year and a half, she’s been fortunate enough to continue working remotely, relying on computer design programs like AutoCad to fill in in situations that might normally require her to be on site. “I was grateful to be an interior designer who worked every day because our customers are still in need.”
Persevering Through an “Interior Design Emergency”
Shabazz recalled a project she worked on that she is particularly proud of. Her interior design group was outfitting a school for service members’ children on a base in Germany. A senior member of the team had been leading the project, but she wasn’t getting some of the details correct, including the fact that drawings needed to be scaled for metric measurements. Eventually the project was reassigned, and Shabazz, who was still an intern at the time, began working on it.
“At one point, another coworker and I worked 14-hour days. We ended up having 13 people working on the project to get it back to where it needed to be, because we were on a time crunch.” There were also millions of dollars at play. She can laugh now, but Shabazz recalled a colleague’s husband who joked that he wanted to come to their office to “see what an interior design emergency looks like.”
“I have pride in my team and the work that we do, and I know how important it is,” Shabazz stated. “I had worked on that school project previously, so I had some institutional memory about it that some people didn’t have. I just said, ‘I want to help and be a part of this.’ ”
“I feel I am doing work that is helping people and that means a lot.
It is so fulfilling to think that I had this dream
and now I'm living it.”
Her reward was that she was asked to travel to Germany to see the project to fruition, which is an unusual perk for an intern. Sure enough, when she and her colleague arrived, there were installation issues and some of the furniture hadn’t arrived yet, so they spent the last hours carefully going through and checking all of the pieces. “It was fulfilling to feel like I was a part of something like that.” She’s also traveled to projects around the U.S. in Washington state, Colorado, and California.
That wasn’t her only emergency project, though. When her own office building was found to have a mold problem, they quickly had to relocate to a new building under an emergency lease. Shabazz was called to help out on that, too. Moving to the new building required furniture, paint, and carpeting, as well as deciding which teams were moving when and the logistics associated with the move. For her work, Shabazz received a Commander’s Award for Civilian Service from the Department of the Army in April 2019.
She points out that her job is not all about design and style. “Interior design can be challenging to teach, because they’re preparing you for unknowns,” she explained. “I have my job with the Corps of Engineers with its unique projects, but interior design work can vary greatly. I know a classmate who works in a university sports facility; one is in residential design; one even builds custom furniture.” In particular, she’s had to learn a lot about technical writing and how to speak specific interior design language with vendors.
Hopes for Hutchison and the Future

Shabazz, who started at Hutchison in the seventh grade, said she’s not entirely sure how her mother heard about Hutchison. “I just know she saw something in me and wanted me to be able to have a strong education,” she explained. “Going to Hutchison meant a lot of opportunity, and it also came with some challenges. At the time I graduated, our class had four black students.”
She admits she sometimes felt isolated at Hutchison, but knows now that she offered help, too. “I’ve had classmates reach out to me and tell me about how much of an impact my being there was for them. I hadn’t realized that because I was in the seventh grade. I was a little girl.”
Over the past year, Shabazz participated in focus groups with the head of school and a visiting scholar of inclusion, where she heard some stories from recent alums about difficult experiences. She knows there’s more work to be done.
“The focus groups motivated me to reinvigorate my relationship with Hutchison because I love the school. I hope to have more opportunities to engage with alums and students.”
She has been thinking about inclusion for a long time. She remembered a specific incident when she was around nine years old. She noticed a Latino couple and wished that she could talk to them. She was aware that Latinos in the Memphis area were being mistreated because they couldn’t speak the language. “I said to myself, ‘I can’t stand for that. I know how it feels to be left out. I don’t want people to feel that way.’ Even at nine I could think about how different their experiences were and how I wanted to help.” That’s one reason she was passionate about mastering Spanish at Hutchison and in college. Similarly, it was after the events of September 11, 2001, that she was inspired to take a class in Arabic while working at Carleton.
In regards to her work, Shabazz is hopeful that someday, she can offer her interior design skills toward some type of humanitarian work. “I would like to find a way to help with some of the crises around homelessness that we have in the United States and even abroad,” she explained. “What are some creative solutions for people in need? That’s what I think I would like to do.” She also hopes to be able to use her Spanish-speaking skills in her work in the future.
Right now, she’s grateful that she is able to work for soldiers with her interior design work. “I feel that I am doing work that is helping people and that means a lot. It is so fulfilling to think that I had this dream and now I’m living it.”
Back